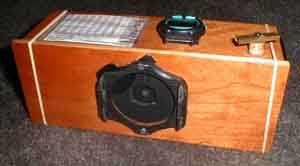 The inspiration for the Clipper 6×18 came from my first wooden pinhole camera, made back in 1997. This camera has consistently created the best images of all my pinhole cameras, and as a stretch goal for my Kickstarter, I wanted to see if I could 3D print it and stretch it to 6×18. That effort exceeded my expectations and the Clipper 6×18 is even better than the original, which has been as far north as Labrador and as far south as Antarctica (Detaille Island). It is the first 3D printed panoramic pinhole camera ever and one of a very few 6×18 production cameras with a curved backplane. Following is the original description I wrote for that inspirational camera on my old website.

I started to build a similar camera way back in high school days. We moved, I grew up, and the unfinished camera eventually disappeared. Occasionally the idea would resurface, bother me, and disappear again. It took the Internet and the World Wide Web to rekindle my interest. In 1997, I was tracking down other things on Lycos and, by serendipitous chance, ran a search for pinhole cameras. One search led to another, and another, and another. The spark in the kindling was the discovery that I could order a set of pinholes from The Pinhole Resource in New Mexico. I also ordered Eric Renner’s Pinhole Photography: Rediscovering a Historic Technique.

I wanted an extreme wide angle perspective, almost a fisheye. At the same time, I wanted an even light exposure throughout the entire image and I wanted to be able to use 120 roll film and take several pictures without needing a darkroom to change the film. This camera achieves that result with a 6cm x 16cm (about 2-1/2” x 6”) panoramic image that has no fall-off from edge to edge. The entire camera is made of aircraft plywood and basswood, with a brass crank and shutter as the only metal items. The original crank was wood also, but broke after several rolls. After it was all done, I added the veneer you see on the final camera and gave it several coats of polyurethane. The total cost of the camera was around $60. It could be made for even less using matboard and would be still be relatively durable with a polyurethane or epoxy coating. 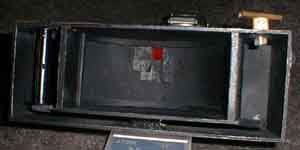 The key to uniform light exposure on a panoramic image is to curve the back so all parts of the film are equidistant from the pinhole. While the ideal would be a spherical back, for practicality reasons, a cylindrical back is the best compromise. As you can see in this photo, the back is curved. The film runs in two small tracks at the top and bottom, and a hole exists in the back (with a red plastic viewing filter) to read the film numbers on the back of 120 film rolls (220 film rolls have no backing and cannot be used unless the back hole is covered). The entire inside and lid are spray-painted with Krylon Ultra-Flat Black, except for the pinhole and the red viewing window.. 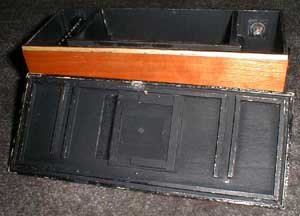 The pinholes come on very thin squares of monel metal (rustproof). For convenience, I mounted the square in a slide mount and made a receptacle for the slide mount on the back of the lid. The slide is secured with a piece of black photo tape. The original idea was to be able to change the pinhole. I have never found occasion to do this yet since I have been so pleased with the sharpness of the images. For softer images, a larger pinhole would be needed. The lid has both inner and outer strips to make a light-tight U-shaped seal on the pinhole camera body. Rubber bands hold the lid on. I had originally intended to make brass catches, but simpler won out in the end. Rubber bands are fast and readily available. 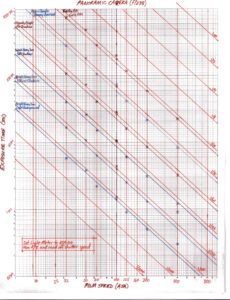 I spent considerable time researching and testing exposure times and came up with this chart, which then went into the exposure table. Other refinements were made after I acquired some experience in using the camera. I modified a Tiffen filter holder to hold additional filters (tungsten correction, for one) and secured the camera shutter under it (see the first picture).

The light exposure guide table is taped on top of the camera for handy reference. I started with the tables in Eric Renner’s book and ended with a table from my graph, modified and verified with many rolls of film.

A cheap $9 stopwatch is velcroed to the top of the camera for long exposure timing (try mentally counting off 600 seconds while wandering around looking at other things). Levels were added to eliminate curved horizons resulting from an off-level camera or tripod. Sometimes these effects were desirable, mostly not. A circular level on top would be better and faster.