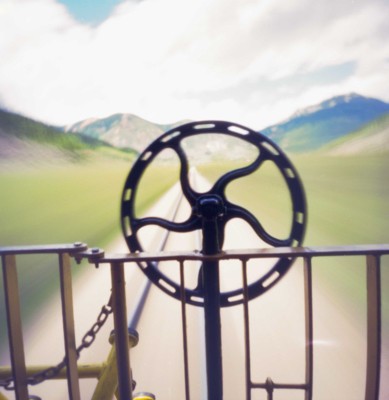 I am so used to this that I forget that photographers new to pinhole photography or film photography might not realize how critical a tripod or stable mount is to getting the sharpest pinhole images. Pinhole cameras with the correct size pinhole can take surprisingly sharp images. However, pinhole images take at least 1/2 second (about as fast as you can manually open and close a shutter) and often several minutes. In low light, you could be talking hours.

Recommended techniques vary according to the exposure and shutter mechanism, and whether you have a tripod. 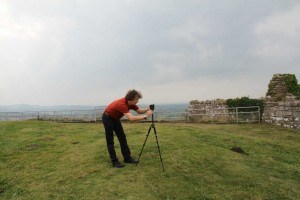 Setting up a tripod shot

With a heavy tripod, you can get away with most anything regardless of exposure time, including manually activating the shutter. If you have a light tripod, you may need to weigh it down with a bag or weights to prevent movement, especially when there’s a wind or when activating the shutter could cause unwanted movement. I frequently use an Ultrapod II for super lightweight and compact travel or a Slik Sprint Mini II for a travel tripod. Here, I’m setting up a shot on the Slik at Beeston Castle on the Cheshire plain (UK).

If you are shooting in the range of 1-2 seconds or less, you want to make sure the camera is stable, resting on a solid base such as a rock, tree, fence, or other immovable object. Since the camera may move while operating the shutter, even with a remote cable release or light tripod, you’ll want to press the camera down so it doesn’t move as you open or close the shutter.

The featured image shows a braking wheel on the Alamosa car on the Durango & Silverton Narrow Gauge Railroad. This was a 2 second exposure on Ektar 100 – the camera was braced and held down (no tripod) on the railing surrounding the small platform. train was moving at speed, creating the blur of the tracks and surrounding scenery.

You may not always want to use a tripod or stable mount. Movement resulting from operating the camera may result in a softer focus or blur, creating a dreamy look in the image. This photo (used by permission) by Brian Richmond perfectly illustrates this and won first place in the 2014 North Texas Business Council for the Arts annual arts contest “On My Own Time”.